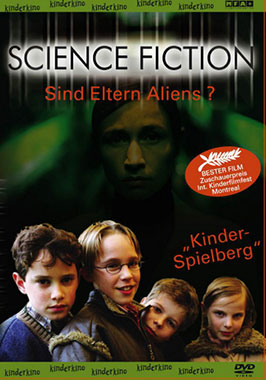 Andreas is new in 4th grade – and he seems being different to all the other pupils. They firstly do nothing but taunt the obviously gifted boy and they know how to do it.

With his scientist parents Andreas has traveled all five continents, has seen the world and speaks multiple languages. Vero lives next door to Andreas and the more she observes Andreas and his parents, the more she is convinced that something is wrong with his parents. Of course they have to to spy on his parents and on what they are working on.

And so they do, including Andreas. Using a babyphone the kids tab a conversation between Andreas’ parents. And what and the way they talk sounds really alarming. For Vero the case is clear. Andreas’ parents are Aliens.

But if so, Andreas must be an alien too, no? To find the answer to the crucial question, the kids break in into the parents lab and bungalow and search the area. They find out that the parents are working on a project called ‘LINEA’ … and, well, if you change a few of those letters, the project reads ‘ALIEN’ …