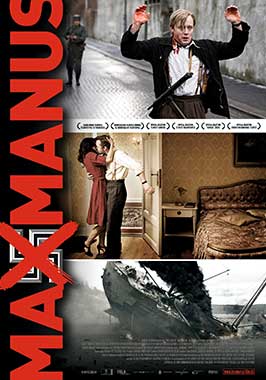 The spectacular story of the Norwegian adventurer MAX MANUS, a sailor and globetrotter before WW2 and one of the most brilliant saboteurs and resistance fighters against the German Wehrmacht during the war. Max was never caught, but during the struggle against the Germans he suffered the loss of almost all his friends and fellow fighters. When the war was over and Norway free again, Max, tortured by his own ability to survive as those around him have been killed, is an alcoholic with broken nerves. But there is Tikken, that Norwegian woman who during the years of war co-ordinated the Norwegian resistance from the British embassy in Stockholm. In spring 1945 Tikken returns to Oslo, looking out for Max.

MAX MANUS – a true story and a great European Movie.

Max Manus died 1996 in Spain at the age of 82. His widow Tikken, at the age of 90, proudly attended the premiere of the movie about her late husband on December 2008 in Oslo. So did her three children and the Norwegian King.

A Norwegian-German-Danish Coproduction, one of the most sucessful Norwegian movies ever with 1,2 Mio sold tickets in Norway. Official candidate for foreign language Academy Award OSCARO® as well as for the Golden Globe and the European Film Award. The movie todate has been sold to 63 territories worldwide.