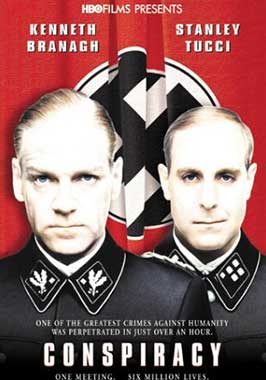 On January 20th, 1942, fifteen of Adolf Hitler’s most important right-hand men, lead by SS General Reinhardt Heydrich, gathered together for a special meeting in Berlin-Wannsee, in which over the course of about ninety minutes they debated Hitler’s latest directive and the best way to implement it.

By the time these 15 political, econmical and military leaders of Germany left the meeting, they had laid the practical groundwork for the “Final Solution,” with the execution of every Jewish person in Europe as their goal. A transcript of the meeting has survived, and that document provided the basis for the screenplay for this movie, which – in real time – dramatizes the meeting of this group of high ranking German officials that led to the greatest crime of the 20th century: The Holocaust.