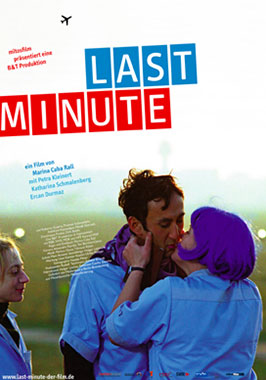 In LAST MINUT three completely different characters meet and for some hours their fate depend on each other. Cleaning woman HEIKE lives an unhappy married life and daydreams of tanned young men on Spanish island Mallorca. Since twenty years Heike clears away other people’s dirt at Berlin Airport and this morning she doesn’t really fancy to work in newcomer NINA, a twenty year old with some criminal record. Nina, who has just learned that she is pregnant. It is quite clear for her that she doesn’t want a child now.

When Heike starts working Nina in to her new and unwanted job the two women discover a darkhaired, tall man in handcuffs, hidden in the storeroom. The foreigner KAWA speaks little German. He has escaped from custody pending deportation and claims to be threatened by torture if being deported to Turkey. While Nina tends to believe him, Heike sees him being a criminal – or maybe even a terrorist who needs to be turned in to the police. But what if Kawa does tell the truth? Distrust and suspicion between the three characters in the cleaner’s storeroom at the Airport slowly turns into curiosity…

Conspiracy
Scroll to top
Manage cookie consent
We use cookies to personalize content and ads, provide social media features, and analyze traffic to our website. We also share information about your use of our website with our social media, advertising and analytics partners. Our partners may combine this information with other data that you have provided to them or that they have collected as part of your use of the Services. You give consent to our cookies when you continue to use our website.
Manage options Manage services Manage vendors Read more about these purposes
View settings
{title} {title} {title}