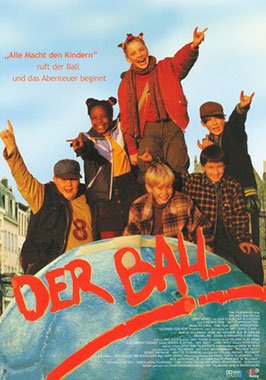 Feature film for children. About friendship, school, trouble with the adult world, Italian bisquits and the adventures of a living, magic ball who can love and hate, who at times is sweet as honey but next moment can start a fierce fighting, and who can act like a jealous idiot. The adults of course don’t believe that something like a ‘living ball’ can exist. What a childish idea! But at the end, when the adults finally understand that the magic living Ball is a reality, they want to firstly have it and secondly of course control it…

This charming filmed fairy tale opened the prestigious childrens film section at the Berlin Filmfestival in 1999 and subsequently was released in many territories and broadcasted around the world.

Ripley’s game
Scroll to top
Manage cookie consent
We use cookies to personalize content and ads, provide social media features, and analyze traffic to our website. We also share information about your use of our website with our social media, advertising and analytics partners. Our partners may combine this information with other data that you have provided to them or that they have collected as part of your use of the Services. You give consent to our cookies when you continue to use our website.
Manage options Manage services Manage vendors Read more about these purposes
View settings
{title} {title} {title}